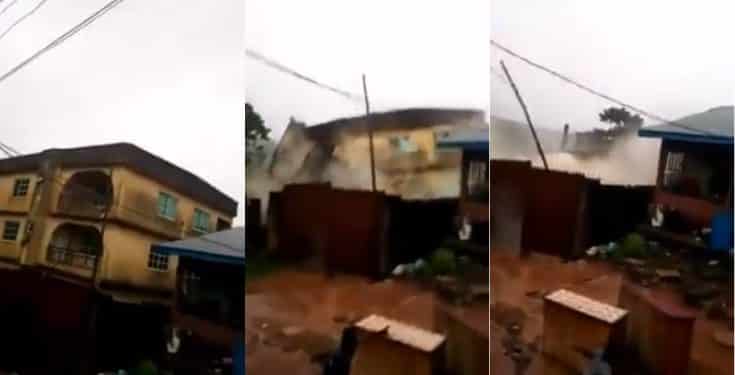 A three-story building yesterday collapsed at No. 22, Nkisi Aroli Street, Onitsha, Anambra State. The building said to belong to one Chukwuma Njeka, collapsed following a downpour. Thankfully, no casualty was recorded.

The prison wall of the Onitsha custodial center, (formerly known as Onitsha prisons) also suffered a similar fate as the rear fence of the prison collapsed at about 6:30 a.m. during the downpour. Eyewitnesses said no casualty was recorded, neither did inmates escape from the facility due to the collapse.

The police spokesperson in the state, Haruna Mohammed, confirmed both incidents, saying the scene was cordoned off by the police to prevent looters from taking advantage of the incident, while the debris was also being cleared.

He added that the Commissioner of Police, John Abang, had ordered for immediate deployment of police personnel to secure the area.

While corroborating eyewitnesses’ accounts that no life was lost in the disaster, Mohammed said the Commissioner of Police had visited the scene and reported no casualty. “The building collapsed on Wednesday due to downpour.

No casualty was recorded and value of property damaged is yet to be ascertained.”

The police spokesman added that the police boss equally visited the Onitsha custodial center, where the rear fence of the prison also collapsed following a downpour. The CP ordered the immediate deployment of police personnel to secure the area

Gisttree is a Nigerian blogger. Music lover, Footballer, and A lover of God. He is a graduate of Computer Science. Contact Us/ Email US: Gisttree@gmail.com.

Chioma Reacts after Davido Proposed to Her

Click one of our representatives below to chat on WhatsApp or send us an email to admin@gisttree.com